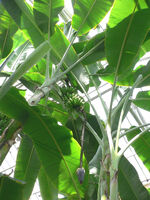 Musa acuminata (common name: Bananito) is a species of the genus Musa that originates from Southern Asia. The plant made its apparition in Occident after a British resident of Mauritius sent two specimens to Sir Joseph Paxton of the Young's Nursery in Epsom. The plant was an instant hit and spread from there, including to Oceania via a missionary who introduced it in Fiji, Samoa, Tonga and Australia, where it established itself as a major crop. This plant is indeed the one from which the Cavendish banana commonly found in groceries originates.